What The Heck Are Modes, And Why Do I need To Learn These Weird Names?

PrevPreviousLearn The Rhythmic Feel And Notation Of Swing
NextHow To Pay Your Band Properly, Demonstrated By Everything Not To DoNext

Good morning everyone, maybe not morning for you as you read this, but it is for me so I think I’ll keep that. I’ll be talking about modes in this post, and particularly, why do they help with improvisation. Most people I come across in jazz or music say modes are useless, or yea I don’t really know about modes or use them…to be honest with you, I immediately discredit them as a professional musician. Want to know why? Because not knowing your modes in jazz is like not knowing your ABC’s as a baby. Know ask yourself this, who doesn’t know their ABC’s that can read and write. No one! So if someone doesn’t know their ABC’s then they don’t know the english language. So when someone says to me modes aren’t important or don’t use them, then they can’t speak the language of jazz. Now maybe, you don’t really think about them as you’re playing, or how they connect to the music, but they are always there and definitely should be learned as part of your foundation. So…lets get into them!

Modes are scales that represent certain harmonies and are usually directly connected to a chord. So as you are playing chords in a piece there are modes that correspond to those chords that you would use for improvisation purposes because they reflect the notes and harmonies within the chord.

Why are modes important?

Modes are important because they will fit with the harmonies of the tune you are playing. If you are a kid and have square block and try and fit it into a circle opening, you’re going to have problems. If you play notes out of the mode that fits with the chord changes…I’m telling you right now, you’re going to have problems. Now there is a difference if you know your modes so well that you are playing notes outside the mode on purpose, and taking creative liberties. But if you have no idea what is going on and are simply guessing at notes, that is going to create an odd musical experience for everyone. The modes will directly imply all the specific harmonies that work for each and every chord change in a tune. They all have an important purpose. With one chord then next chord can’t happen. If you can imagine a row of dominoes lines up. If one domino is out of place it will break the chain. This holds true for the chord changes.

How in the world do I use the modes to improvise

In the mode you’ll have 7 notes available to solo with. Ready to see how easy this is? You can pick any notes from the mode and improvise with them. Did I say any? Yes I did! You just make up what you want to play and be creative. Obviously there are more approaches to advance but this how you start! You can play patterns, move up, move down, play skips. Whatever you want works, as long as you are playing the notes within the mode.

What notes are in the mode?

How do I know what mode to play for the chords?

As long as you know your major scales well then you’ll be able to play your modes. Hopefully you’ve seen how much your major scales play a part in jazz piano. So this is how it works. In the key of C we have 7 diatonic 7th chords that are created from the notes from the C major scale. Refer to the Diatonic Harmony to learn more about this if you would like. There is a mode directly connected to each one of these chords and they create certain characteristics for that chord. Below are the names of the modes and what chord they go with.
Click to download and see all modes 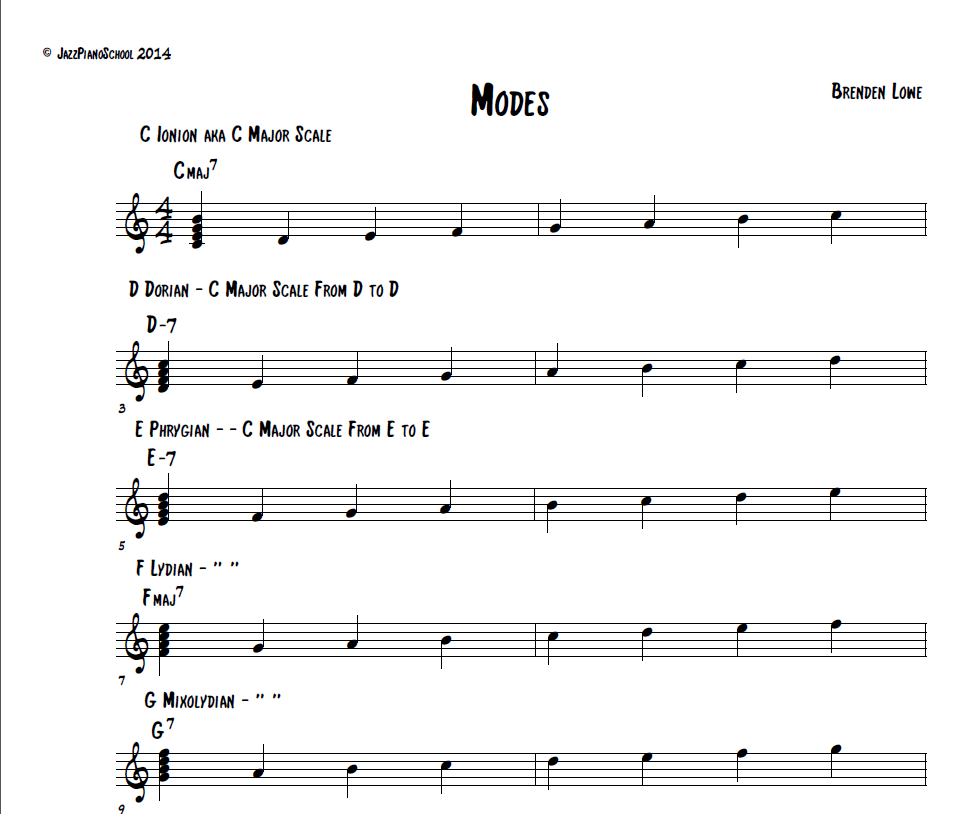 There are two ways you will want to think about this.

You can play your mode for each diatonic chord very easily by simply starting your major scale of the key you are in, on the corresponding degree of the scale. For example if you are playing a ii-7 chord in the key of C, (D-7) then you start your C major scale on a D and end on a D. That’s your dorian mode!

Let’s say you were on the V7 chord in the key of C, (G7) chord, to play your mixolydian mode you would play your C major scale from G to G. It’s really that easy.

As you become more advanced with the mode you’ll learn to play the mode not based off the major scale but based off the characteristics that the mode presents. So you’d be able to play all the different modes starting on the same note, such as the note C. You could play a C Ionion, C Dorion, C Phyrigian, and so on. This is a little hard because you need to know the key they are associated with and the different characteristics of each mode. For now, start with the first way to learn your modes.

If we are playing all the notes from a major scale but starting on different notes won’t that all sound the same?

Nope! And I’ll tell you why. The bass notes are and chord structure will change the sound of the harmonies. Your ear is going to hear a different stack of notes starting from the bottom up to improvise over. So the arrangement of all the notes matter drastically in harmony and this is what is changing. The root, 3rd, 5th and 7th, of our ionion mode are completely different than the root, 3rd, 5th, and 7th, of our lydian mode. Thus, we will be creating a different sound.

Alright so I hope you enjoyed this post on modes and why they are important. We will be talking more about modes and how to analyze chord changes in tunes to find the correct mode later on. Until then, practice your modes with your diatonic chords and you’ll be way ahead of the game.

Learn From The Classical Side Of Bill Evans